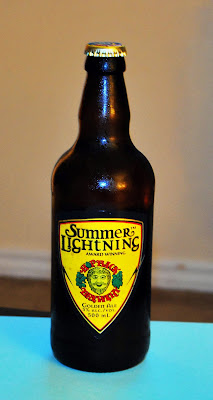 When I purchased this one, I wholly expected a pretentious ale with no redeeming qualities whatsoever. From the cross-eyed pagan motif on the label to the sea monkeys visible when held up to the light, one had to wonder how good this stuff could be. Further inspection indicated this beer is brewed in England by Hopback Brewery and has an ABV of 5%. The back label also explained that this beer is "bottle conditioned" and contained "natural yeast sediment" (aka sea monkeys) and it should be stored in an upright to prevent the sediment from mixing in the beer. The brewery's website has this to say about the product:

A trendsetter in the brewing industry; the original Summer ale brewed all year round. An extremely pleasant bitter, straw coloured beer with a terrific fresh, hoppy aroma. This, coupled with an intense bitterness, leads to an excellent long, dry finish. Probably the beer to receive the most awards in Britain!

The beer pours out golden with a thin head that barely leaves lacing in the glass. It had no discernable scent other than beer. We poured it carefully to leave most of the sea monkeys in the bottle, and knocked it back without hesitation. Surprisingly, the flavour was mild with a slightly bitter finish. Brain commented that he could get drunk on it and that there was nothing bad to say about this one. Overall, a decent beer from a country that makes very few of them. I recommend keeping an eye out for it.
Posted by Liquor Pig at 8:00 AM 1 comment: 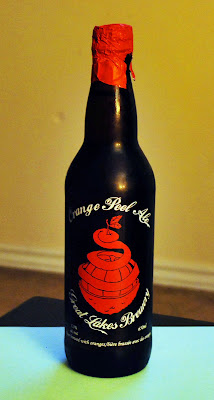 This is an oddity from Great Lakes Brewery that I had picked up several times at the LCBO and placed back on the shelf. As regular readers of this blog know, I am not a huge fan of fruit-flavoured beer to begin with, and furthermore there is just something about "orange peel ale" that screams "jailhouse hooch." In the crazier days of my youth, I knew a few people that had served time as "wards of the state" and they had all told stories about how orange peels is one of the main ingredients to making prison booze. Despite my reservations (or perhaps because of them), I finally bit the bullet and picked up a bottle to try. Would this prove to be a tasty, fruit-infused beverage, or a bottled nightmare designed to remind cultured ex-convicts about their days on the range? We would soon find out!

Further inspection of the bottle indicated this was "beer brewed with oranges" and has an ABV of 5.3%. The back of the bottle had this to say about the product:

In our quest to bring you the most flavourful and unique beers possible, we are proud to release this tasty summer ale. Handcrafted with five specialty malts and five varieties of hops, along with just a touch of honey, we added heaps of fresh oranges and peels into the boil. A little different, you say? We sure hope so. Orange Peel Ale balances the unique flavour of oranges with generous amounts of hops to achieve a slightly fruity and refreshing taste.

Unfortunately, that description sent further involuntary shivers down my spine as this sounded like a recipe for disaster. Brian seconded my reservations, and as we poured it into our glasses, we felt that black cloud of dread creep into the room. Brian raised his glass first and smelled the contents, declaring that it had no smell other than beer. There really was no indication of what this beer was made from, other than barley and hops. We both raised our cups and drank. Surprisingly, this was a refreshing beverage with a crisp taste and a slight citrus note on the finish. Brian exclaimed "this is good beer!" as I was at loss to come up with anything bad to say about the product. Different but decent, this is an excellent beer for a lazy summer barbecue or relaxing around the pool. Don't let visions of Cell Block H scare you away from giving it a try.
Posted by Liquor Pig at 11:15 AM 4 comments: 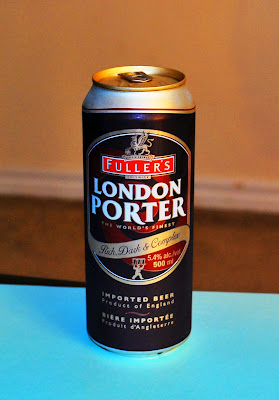 On the heels of Fuller's ESB, we have reviewed another product from this English brewery. I picked this up at the LCBO along with several other ales that Brian and I reviewed that night. The can stated the contents were "rich, dark and complex" and it had an ABV of 5.4%.

The Fuller's website has this to say about their London Porter:

Fuller's London Porter is ranked the number one tasting Porter in the world on ratebeer.com. Indeed, London Porter is a superb, award-winning beer having captured the gold and silver medals at the 1999, 2000 and 2002 International Beer & Cider Competitions.

The origins of Porter date back to London in the early nineteenth century when it was popular to mix two or three beers -- usually an old, well-vatted or "stale" brown ale -- with a new brown ale and a pale ale. It was time-consuming for the pub owner to pull from three casks for one pint, so brewers in London tested and produced a new beer, known as entire, to match the tastes of such mixtures. Using high roasted malts, entire was dark, cloudy and hoppy. It was also easily produced in bulk and ideally suited to the soft well water of London. Very quickly, it became popular among the porters working in Billingsgate and Smithfield markets. Gradually, the beer took on the name Porter in recognition of its greatest devotees.

I popped the chilled can and poured the rich, black contents into a couple of glasses. Being a fan of Irish stout, I wondered how bad this one could be? It didn't smell bad, and the white, creamy head looked quite appealling. We both raised our glasses and took a hefty pull.

"Tarry!" came the exclamation from Brian as this one hit his tastebuds. Unlike Guinness which has a pleasant malt taste, London Porter is extremely malty and seemed to attack the tongue with a burnt chocolate taste as you drank it. While I was able to stomach mine, Brian had huge problems with this one. "I can't drink this," he stated. "It is like a Reese's commercial gone horribly wrong!" The heavy flavour of this one may be enjoyed by those who like their beer dark and malty, but keep in mind this is definitely no Guinness. As Brian dumped the contents of his glass, his final comment was "I don't need a tongue glove."
Posted by Liquor Pig at 3:20 AM 4 comments: 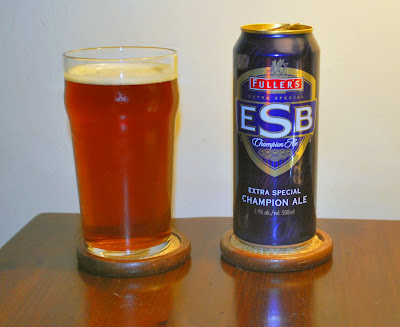 My apologies for the lack of updates. While the summer is a time when I consume untold gallons of ale, I am often found in Ontario's north country on my days off, far from any kind of internet access. However, I will try to post more regularly in the future. Have no fear, I have not quit drinking! After all, a summer without alcohol is akin to a world without air. Seriously. Now on to the subject of today's review.

As regular readers of this blog are aware, I am not a huge fan of English ale. Aside from Bass Ale and Fuller's London Pride, I really can't give glowing recommendations to many of the beers coming out of England (gin is a different story, however). So I understandably had my reservations when I spotted this example of English brewing at the Ajax LCBO. While it was from England, it was made by Fuller's and being the author of this blog, I had to try it out.

Further research on the Fuller's website yielded this glowing praise:

With a track record like that, there is little wonder this is being marketed in North America as "Champion Ale". So after chilling the beer down, I grabbed my favourite pint glass and sat down to give this beer the full Liquor Pig treatment.

The can gives no indication of the awards this beer has won, save for the "champion" moniker in the description. It pours a clear dark brown with a nice head that laces the glass as it is consumed, and has an abv of 5.9%. I raised the glass and could not detect any skunkiness or otherwise "off" odours. The ale has a very sweet and malty profile, with slightly more hops in the flavour than I would have liked but not enough to render it undrinkable (unlike some of the swill that passes for beer I have reviewed). Ultimately, I wouldn't rank this up with Bass or London Pride, but it certainly is much better than Boddington's or Tetley's. While it wasn't an instant hit with me, I can see why fans of English style bitter praise it so highly.
Posted by Liquor Pig at 12:43 PM 1 comment: