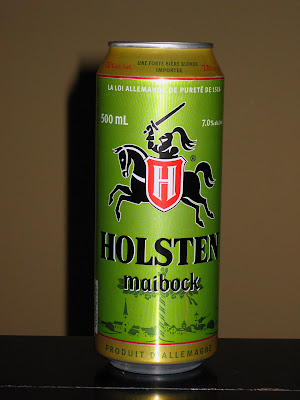 It has been my experience that any beer with the word "bock" in the name is going to be a giant can of misery. I have tried many bock beers over the years and have never once found one I would like to drink again. Spying this one at the Ajax LCBO, I thought it would be an excellent subject for review. Holsten Brewery (a fully owned subsidiary of The Carlsberg Group) was founded in northern Germany in 1953. The actual brewery webpage is written completely in German, and as such could not be used as a source of information. However, I did find a webpage that had this to say about the brand:

Holsten is one of the Carlsberg Group's biggest brands.

Holsten was first developed and produced by the Holsten Brewery in Northern Germany in 1953. Since then it has expanded to many other markets, primarily in Europe, and today you can experience the great taste of Holsten Pilsener in many countries around the globe.

Where does the Holsten name come from?

Once upon a time a Germanic tribe called the "Holsten" lived in northern Germany in the region that is now called Holstein. According to the "Chronica Slavorum", written in the 12th century, the Holsten were described as a freedom-loving, bull-headed and very hospitable people. Perhaps the founders of the Holsten-Brauerei AG had these characteristics in mind when they christened their brewery in 1879.

Upon arriving at Brian's, I handed the can to him as Michelle asked "is that a maibock?" Apparently, the two of them are big fans of this brewing style and were looking forward to the experience. Brian stated that due to the usually high alcohol content of maibock in general (Holsten Maibock weighs in at 7% abv), they are perfect for getting a glow on before seeing a movie. We chilled the beer and poured it out. The brew was amber, clear and had no odour whatsoever. The flavour was pleasant with a slight alcohol burn. However, if the beer had been slightly colder, I doubt you would have been able to detect it. "It doesn't stab you in the mouth like other high-percentage beer," remarked Brian as Michelle simply said, "I'd drink it again."
Posted by Liquor Pig at 8:00 AM 2 comments: 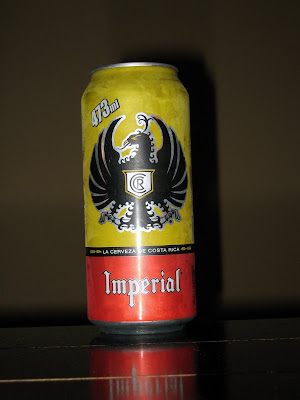 My sister brought this one back for me from a recent trip to Costa Rica. She said that it was the beer she drank the majority of while she was there, and thought I would like it. Apparently, she grabbed six talls for me, and realized that she had no room in her suitcase for them and that they would not allow her to board the plane with them in her carry-on. Her boyfriend then offered to pack them in his suitcase. Unfortunately, the added weight of the six talls pushed his suitcase over the weight restriction and he ended up being charges a $50 surcharge for the added weight. Quite an expensive six pack as it turns out.

The label does not indicate much about this product other than it is beer and from Costa Rica. No abv value was given, or any kind of description as to what to expect from the contents. The beer poured very clear and was devoid of any kind of odour. It was also devoid of any kind of taste, but was cool and refreshing which as Brian stated, "[is] what you'd expect a tropical beer to be." Recommended if you are ever on an eco-trek through Costa Rica, and find the tropical heat is putting a thirst on you.
Posted by Liquor Pig at 4:42 PM 2 comments: