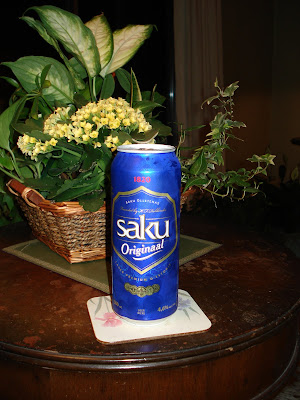 When my cousin tasted this one, it must have been akin to when Nikki Sixx discovered heroin. His eyes lit up like a Christmas tree and all he could say is "this shit is great! Get Sakued!" Definately two thumbs up.
Posted by Liquor Pig at 8:00 AM 5 comments: 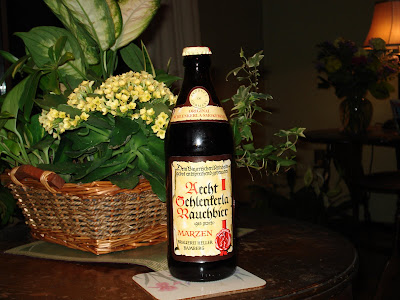 Being a sucker for pretty packaging (as well as being unable to read German), I picked this one up at random from the LCBO last night. Perhaps there is something to be said about purchasing foreign beers without any idea of what they may contain, as this one was one of the weirdest concoctions yet reviewed. Upon arriving at my cousin's house, further study of the product found this on the label:

Being a lover of fine single-malt Scotch whiskey, I am quite familiar with the practice of smoking barley with peat prior to brewing and distilling good Scotch, but why would anyone try this with beer? Would it prove to be a unique, tasty beverage, or another nightmare to be sinked? Nervously, I uncapped it and poured it into two glasses. The dark ale was clear and smelled like beef jerky, which gave rise to Rob's cry of "ach, das schtinkant!" Pushing through the smoky aroma, we raised our glasses and drank. This stuff literally tasted like beef jerky soaked in Guinness, with a very long smoky finish. Aside from the novelty of being smoky and "beefy", the taste was extremely one-dimensional, and was reminscent of a smoky OXO cube dissolved in water. The hardest part about drinking this was the smell. While smoky Islay Scotch has a pleasant smoky scent, this stuff reeks like the shell of a burned-out Flint, Michigan housing project. If you can get past the strong smell, it is an interesting novelty but not one I would like to experience again soon. Fans of beef jerky might actually enjoy this, but in my experience this is more suited to daring your friends to chug at drunken frat parties. 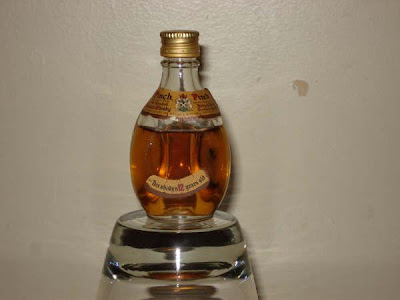 This one is an anomaly on so many different levels. We found it in my cousin's beer fridge mixed in with a pile of other minis of various liquors. The pinch comes in a diamond shaped bottle which was initially what drew our attention to it. The label indicates it is distilled in Scotland by Haig and Haig and is 12 years old. Having never heard of this particular scotch, we were rather curious as to what it tasted like. Additionally, we could not figure out why this bottle was down a quarter, yet the seal had not been cracked. Would it be a wonderous flavour experience? Or would it be another depressing glass of horrible liquor? Time would tell, and rather quickly.

Chanelle, Robert and I poured what remained in the bottle into three shot glasses. In all, we all sampled what amounted to about a half shot each. As we raised the glasses, the smell was initially what caught us off guard. Chanelle remarked it burned her nostrils and "just smelled so bad!" Robert and I concurred that this stuff simply smelled wrong. We prepared a chaser and tipped back our glasses. As this golden liquid flowed over my palate, I thought this must be what tasting white phosphorous must be like. It burned as you tasted it, burned more as you swallowed it and then set fire to your stomach as it finally sat in your gullet. Robert seriously resisted the urge to spit it over the apartment floor. "This tastes like it smells, and it smells like shit." I personally was amazed how half a shot glass could literally seem like gallons. This truly is Scotland's version of Corporal Punishment. Harsh, nasty and unrelenting. A word of caution: 15 minutes afterwards I belched and could still taste The Pinch. The verdict? In a pinch, choose to drink something else.
Posted by Liquor Pig at 11:19 PM 13 comments: 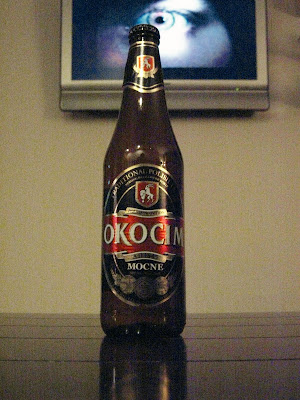 Fixing computers is thirsty work. So when Brian asked me to stop by and do some work on his, it was a given that I would be stopping off at the LCBO on my way over. As it turns out, this bottle represents the purest essance of Liquor Pig. I had never heard of nor seen this beer before, and I found its name rather intriguing. So out of complete curiosity I grabbed it and took it to Brian's to find out what it tasted like. As it turns out, Okocim is produced in Brzesko, Poland at one of the countries oldest breweries. Established in 1845 by Johann Evangelist Götz, the Okocim was nationalized in 1945 and once again privitized in the 1990s. Since 1996, it has been part of Carlsberg Breweries A/S. They currently make OK, Signature, Mocne, Porter, Karmi, Palone, and Zagłoba. Mochne is the medium malt beer they produce.

We were curious what this one was going to be like. In my experience, most eastern European beers are the most similar to Canadian beers in taste profile, and as such expected this one to be at the very least palatable. Brian, who is actually a big fan of Polish beer, also expected a decent glass of ale. Michelle, on the other hand, was the voice of dissent and expected this to be another vile concotion I brought over just so I could laugh at her trying to force it down. Alas, this was not to be the case. Okocim Mocne pours a golden-amber colour and has a crisp, refreshing flavour with little to no aftertaste. All three of us thoroughly enjoyed it and could easily imagine passing away a warm summer afternoon with a fridge stocked with this stuff. Hard to pronounce but easy to drink, Okocim Mocne will most definately be making another appearance in this man's refrigerator.
Posted by Liquor Pig at 12:38 PM No comments: 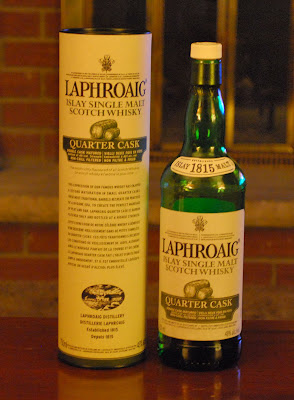 Called the most richly flavoured of all Scotch whiskies, Laphroaig is a heavyweight among Scotland's single malts. A strong smokey peat scent rises from the glass, and is enhanced by the addition of just a little water. Typical of many Islay Scotches, the flavour is very strong, briny and smoky with notes of iodine showing through, and the finish of this 48% abv burns and smokes its way across the palate with a finish that is as full-flavoured as its initial bite. Are you wondering why anyone would drink such a concoction? You probably already have. Laphroaig is used as a base for many popular blended Scotch whiskies, as its full flavour is a great base to build a quality blend upon. But what you have probably tasted in passing is but a ghost compared to a full shot of Laphroaig on its own.

Laphroaig Quarter Cask harkens back to a time when whiskey making was unhurried and an altogether slower process. It is first matured in normal barrels, but is then removed and placed in quarter-sized casks that allow for 60% more contact with the oak wood. This creates a product that is sweeter with a velvetly feel that much more traditional in nature than many whiskies produced today. It is bottled at cask strength, so a little water is recommended to fully bring out the Islay flavour. To complete its traditional profile, Laphroaig Double Cask is not chill-filtered like most of its modern counterparts, which means it will cloud up with the addition of water. The result is a whiskey much like that which was produced 100 years ago.
Upon opening the shipping tube that contained my bottle, I was suprised to find a booklet packed with the bottle. Apparently, anyone purchasing a bottle of Laphroaig is given a unique code, with which they may log onto Laphroaig's website and lay claim to a square foot of land on the Laphroaig distillery grounds on the Isle of Islay. Unfortunately, you cannot buy up cases of Laphroaig and use the resulting land to farm sheep, cut peat or build a house upon. However, by laying claim to your square foot of Islay, you may claim your "rent" by placing your national flag on your plot, and receiving a free dram of Laphroaig should you ever visit the distillery grounds. An excellent marketing scheme if I have ever heard of one! Once you registed your unique code, you are determined to be a "Friend of Laphroaig" and given access to a personal webspace on their site, which provides access to their forum as well as a digital map showing the location of your plot. 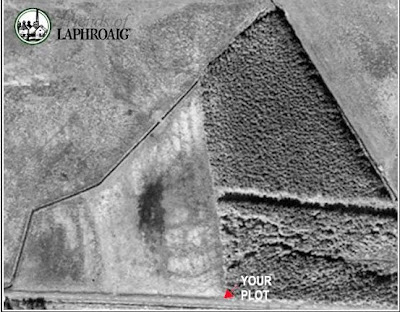 In addition to the website feed, you are also given the opportunity to purchase various Laphroaig products and take part in their forums where you can meet fellow Friends of Laphroaig around the world. Not a bad deal at all for buying a bottle of a very good single malt whiskey. I strongly recommend all lovers of Scotch to at least give this one a try. It is excellent neat or with just a bit of water, and accompanied by a fine cigar. Life doesn't get much better than this!
Posted by Liquor Pig at 2:11 AM 3 comments: