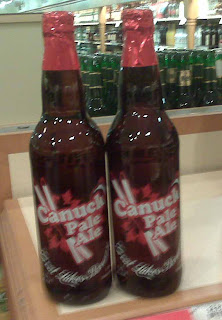 Oh Great Lakes Brewing Company, I cannot resist your charms. Despite the fact that I cannot get the morose aftertaste of your "winter beer" out of my mouth months later, when I see a new one of your over sized bottles, I must put it in my cart.
Enter "Canuck Pale Ale" purchased during the Canada/US hockey showdown of the Olympics, it was the perfect choice to show my patriotism. I hoped it would be as delicious as Orange Peel Ale was but upon my first taste that dream was shattered.
This Pale Ale has an over spiced nature to it, nowhere near as glaring as bad as the Winter beer but it left a somewhat tacky aftertaste. Numerous helpings were less discordant but I finished the bottle knowing it would probably be my last.
This is truly the middle child of beers I've tried from the Great Lakes Brewing Company, nowhere near the worst but certainly not the best. If I was offered one in a social situation, I wouldn't turn it down but I'd probably nurse it.
Overall 5/10
It goes without saying that I still look forward to their next concoction.
--Brain
Posted by Plaidstallions at 4:12 PM