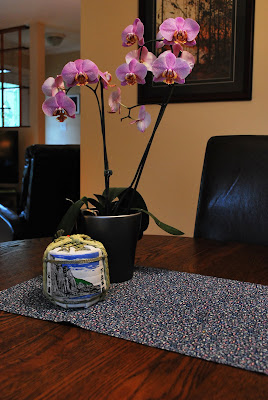 This is a bottle of sake that Liquor Piglet picked up on a trip to visit her sister in Japan back in 2005. Given the ornate dressing on the bottle, I'd like to think she purchased it from an acient Japanese man looking like Fu Manchu in a back alley in Tokyo, but in reality it was given to her as a gift from the class her sister taught in the Land of the Rising Sun. Having nobody to drink it with (and not being a sake drinker herself) she put it in the fridge until tonight when we cracked it open. Such a monumental occasion is perfect for the Liquor Pig resurrection, so here is our thoughts on this very Japanese drink. 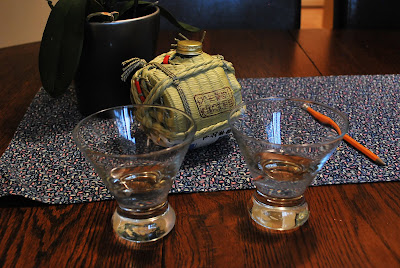 As previously mentioned, the sake was obtained in Mutsu City, Japan and is packaged in an ornate bottle dressing that alludes to high quality contents. I cracked the seal on the bottle and poured two samples for us to try. The liquor itself was quite clear and appeared similar to tap water. We both detected a strong alcoholic odour from this hooch, and a slightly fruity note was apparent to myself. Liquor Piglet described the scent as "boozy". With a hearty 'cheers' we knocked back a healthy pull and were rewarded with quite a pleasant beverage. I am unsure how sake ages in comparison to regular wine, but the taste was very good to this sake virgin. The taste was slightly sweet with a smooth palate. Liquor Piglet exclaimed "I'd like me some more of that!" as she took another pull of the liquor. It should be noted however, that the taste also gave a slightly "tingly" feel on the tongue - likely the byproduct of a high alcoholic content. However, the taste definitely disguises the alcohol beautifully. While we both thought a night of sucking the sake back would result in a five-star hangover, the uninitiated would never suspect it before it was too late. I felt this was a perfect prelude for someone to give you before deciding to steal your kidneys. However, for better or worse, we'd both be more than willing to drink it again.