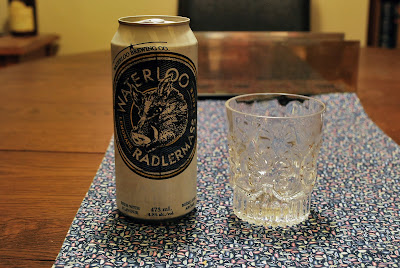 " Lemonade Lager" jumped out at me as I picked up this throwback to the shandy craze of the early 80's. While I personally tend to dislike "flavoured" beers, I have enjoyed Waterloo products enough in the past to give this one a try (I think it may be their wild pig motif that does it). The Brick Brewery website had this to say about the German-inspired creation:

After World War I, bicycle riding became popular in Germany. A local innkeeper opened his own watering hole and arranged for a bike trail through Munich to his alpine meadow, only to find some 13,000 cyclists had descended upon his establishment and almost depleted him of his fine beer. Quick thinking led him to mix a stock of lemon soda with his remaining beer and he called it Radlermass (Radler meaning cyclist and Mass means litre of beer in German), which became a wonderful refreshing summer drink.

I can only imagine what a bunch of half-drunk Germans thought when they suddenly realized their "fine beer" had been cut with lemonade, but I digress. As for our own experience, Brian, Liquor Piglet and I chilled the can down to serving temperature and noted the 4.8% abv. The brew poured clean without any sea monkeys or any discernable odour. We tipped our glasses back and discovered Waterloo Radlermass has an initial fruity, citrous taste which is quickly followed by what Brian described as "a boot mark on the back of the tongue". It became obvious that this product contains much more lemonade than beer, and was a little too fruity for our likings. Overall, I wouldn't call it bad or good and I could see how it could quench a dire thirst on a hot summer day. However I can safely say that I could never get drunk on it without becoming violently ill. Liquor Piglet fared the worst during this tasting, as she absolutely hated this concoction. As she put it, "when life gives you lemons, there really is no need to make lemonade beer."

magine that of a few half-drunk Italians considered once they out of the blue realized their particular "fine beer" was cut with lemonade, on the other hand digress.cheap rs gold


You’ve written nice post, I am gonna bookmark this page, thanks for info. I actually appreciate your own position and I will be sure to come back here.
hp printer customer care number