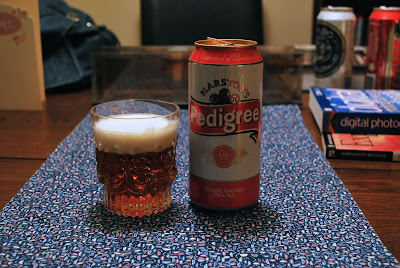 This was a taster that Brian brought over to Chez Pig for review. Generally, I find Engish ale to be a bit of a paradox in that they are never terrible enough to receive the toilet treatment, yet are never really good enough to work up a thirst for (unless it is +100 outside with humidity so high your ballsack is sticking to your leg, but then even Beck's would taste good in that situation). This beer proved to be no exception. The Marston's webpage had this to say about this ale:

Marston's Pedigree™ has a distinctive flavour. This is down to its special blend of Burton spring water, Maris Otter barley, Fuggles and Goldings hops and Pedigree's™ own unique strain of yeast.

It has a dry hop aroma with a full range of complex flavours. The melding of nut, fruit and winey flavours create a smooth and very drinkable satisfying whole.

This ale weighs in at 4.5% abv, odourless and pours clear with no sea monkeys. Brian, Liquor Piglet and myself tipped our glasses back and found that while it was generally as flat as most English ale, the flavour itself was pleasant enough. Nothing spectacular, but it was hard to find anything disagreeable about it. As Liquor Piglet remarked, it was "totally average" and I thought it was a fine candidate for moving or having a general piss-up, as I couldn't see anyone objecting to it. Brian stated the beer seemed like something "some Brit would be drinking as he was kicking you in the head." It wasn't great, but it wasn't bad either. Just an adequate middle-of-the-road English ale.

Marston's Pedigree? features a distinctive taste. That is down to their particular combination of Burton early spring h2o, Maris Otter barley, Fuggles as well as Goldings hops and also Pedigree's? very own exclusive strain associated with candida. buy rs gold

i am really digging into Marston's Pedigree.i think its an incredible beer. i will surely add it into my store Beverage Depot Liquors inventory.

I enjoyed over read your blog post. Your blog have nice information, I got good ideas from this amazing blog. I am always searching like this type blog post. I hope I will see again.
hp printer customer care number